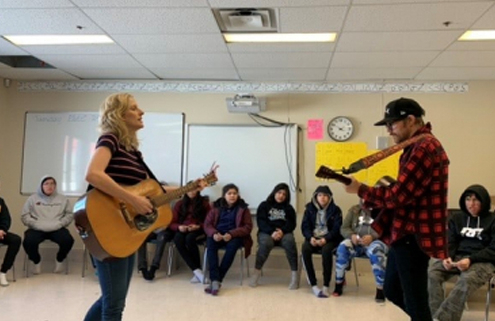 Several communities along the James Bay Ice Road were treated with a special visit to their high schools by musicians Melissa McClelland and Luke Doucet of Whitehorse in early March. Students at Vezina Secondary School in Attawapiskat, ON; Francine J. Wesley Secondary School in Kashechewan, ON and Delores D. Echum Composite School in Moose Factory, ON were able to hear the band perform and ask questions of them and their involvement with the Gord Downie & Chaine Wenjack Fund Artist Ambassador program. The Legacy Schools High School Artist Ambassador program brings Indigenous and non-Indigenous musicians and other artists into high schools across Canada to inspire student leadership and forward the journey of reconciliation in school communities.

Once landed in Attawapiskat, the band and DWF staff went for a delicious lunch at Adrian Sutherland’s (of the band Midnight Shine, another Artist Ambassador) restaurant “The Moose Takeout”. 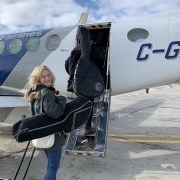 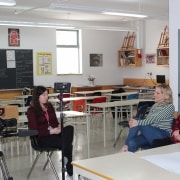 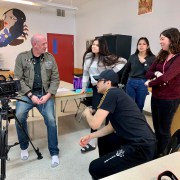 Students interviewed Whitehorse and took videos and photos for their art class, and were encouraged to ask questions. Two of the most popular questions by students for Whitehorse were, “Who is older?” and “How much money do you make as musicians?”. 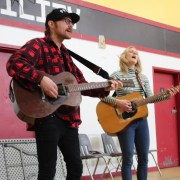 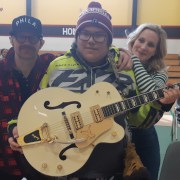 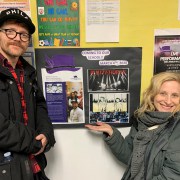 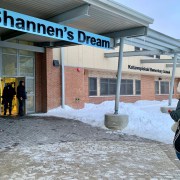 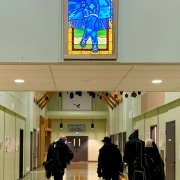 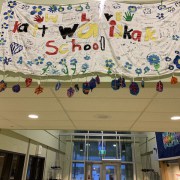 In the afternoon, Whitehorse played a schoolwide concert in the gym. Following this, students got to try out Luke’s white Falcon guitar and take photos with the band. That evening, Whitehorse put on a community show at Kattawapiskat Elementary School, a school that was built after Shannen Koostachin and her peers launched the Students Helping Students campaign. The campaign was created in response to the government backing away from building a new elementary school in Attawapiskat for the third time in 2007. 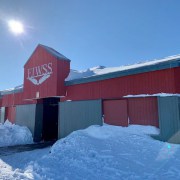 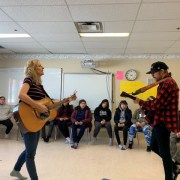 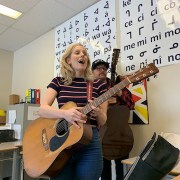 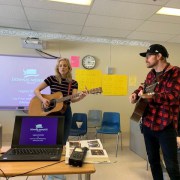 Students from music, English, and art classes met in the library to participate in the Artist Ambassador visit. Whitehorse had two sessions with students, during which they performed a rendition of “I Will Not Be Struck” – the same song they performed at Secret Path Live in October 2019 in Toronto. They chatted with students about what it meant to them to be part of that night and to be part of building Gord and Chanie’s legacy. Students got to check out the guitars and play a few chords, while other students took photos and videos as part of a workshop.

While driving down the James Bay Ice Road, the band encountered a group of people walking. Jasmine Koostachin, a member of Fort Albany First Nation, was walking a 150 km protest of the escalating drug problems within the northern communities. 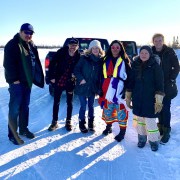 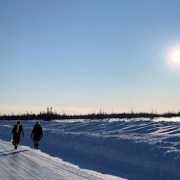 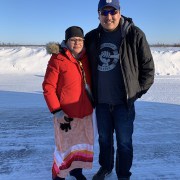 Jasmine shared that she had a spiritual awakening, and felt the need to do the walk for her own healing and pray for her people who are struggling. She shared that each community has a need for local facilities rather than having to travel to urban areas where they may be at risk or exposed to harder drugs. Each day someone walked with her; Elders, relatives and community members.

In Moose Factory, a visit to Delores D. Echum High School started with a tour through the school with Principal Don Cheechoo. He showed us the robotics lab, woodworking shop (where students were making a canoe), and the mechanics shop where snowmobiles, cars and small engines get worked on. The school has an attendance program where students make Mahekum dollars when they maintain good attendance. The dollars can be used at the school store to buy things such as water bottles, school shirts, school supplies and if you save enough, a new computer or a bicycle. It’s made a noticeable increase in attendance and students learn the power of saving. Local Elders teach beading and cooking in the school, and the school’s freezer was filled with game such as goose, beaver and moose. 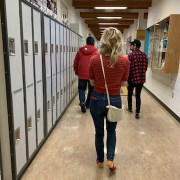 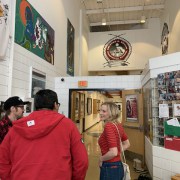 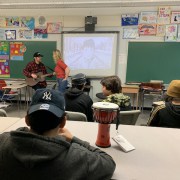 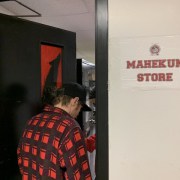 During the Artist Ambassador session, grade 8 students heard more about Chanie’s story, Gord’s passion and how Whitehorse became involved. This time students were able to contribute to the songs playing drums and egg shakers. Check the LIVE session Whitehorse shared on Facebook to hear the amazing rhythm section by students. Some of the students took part in a video workshop and were able to film the session for their school. 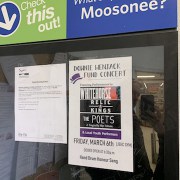 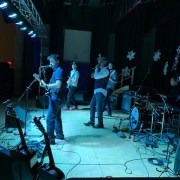 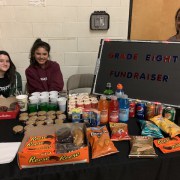 Whitehorse performed a community concert that evening at the JBEC auditorium which is attached to Moosonee Public School. Curry Gray’s grade 9 students at Northern Lights High School (and DWF Legacy School) had made all of the community concert posters for the event. Luke and Melissa were happy to be able to sign the posters and return them to the talented students who made them. Tameira, a student at Northern Lights High School also took photographs throughout the evening as the concert photographer. Grade 8 students also took part, selling delicious baked goods to raise money for their school trip during the show. Rob Faries of Relic Kings opened for Whitehorse along with Toxic Bay (a local band that played covers of Metallica and Alice in Chains), Curry Gray and the Poets (a Tragically Hip cover band that translates songs into Cree). After the show, Whitehorse signed autographs and took photos with community members.

Stan Kapashesit, Director of Economic Development for the Moose Cree First Nation treated DWF and Whitehorse to a tour of the community. He took the group to Hudson Bay House, the Cree Cultural Centre, the old Cold War military base and to the grounds where the residential school once stood. The fence remains at the site, and at the top of the fence you can see where the barbed wire once ran, but instead of turned out, it’s turned in to ensure children didn’t try to escape.

The trip ended with some of the group attending one of the James Bay Community Cup Tournament hockey games. It was a close game between Attawapiskat and Moose Factory, and the group was able to reunite with some of the students from the previous school visits. 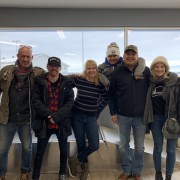 Overall, it was an extraordinary experience. We are grateful for the journey and all the wonderful people who welcomed us into their schools and community. Chi miigwetch, thank you!

30 Books by Indigenous Authors to Read With Your Kids!
Scroll to top